Return to the Teachers page

I am a speech-language pathologist who works with children at two private practices in the Washington DC metro area. I recently stumbled upon the Wanderful iPad apps when one of my students began talking with surprising animation about a Living Books PC game (Sheila Rae the Brave) that he had played on his home computer.

Curious about what had him so excited, I located a video play-through of the story online and decided to try using it during the therapy session. After we listened to each page being read aloud, I asked the student “wh-” questions (e.g., who, what, where) about the text, pictures, and animations. As this student often produces only short utterances such as "sleep" or "mouse sleep," I used the Living Books story to encourage longer noun+is/are+verb(ing) sentence combinations (e.g., "The mouse is sleeping," "The flowers are singing"). The story leant itself extremely well to the production of complete and descriptive sentences, particularly because there were so many characters that "came to life" and carried out a wide variety of amusing actions.

The therapy session was a huge success, and the Living Books story increased my student's interest and engagement level in a way that regular children’s books never did. Though my offices have iPads, I had not yet managed to find any interactive books of similar quality available in app format.

On a whim, I decided to type "Living Books" into the App Store's search field. I was thrilled to discover that Wanderful had adapted a number of the original Living Books PC games as iPad apps! I have since been using the Wanderful apps, such as Arthur's Teacher Trouble and Little Monster at School during sessions with children at both of my offices. Examples of how they can be used to address speech-language therapy goals (or to expand any child's communication skills) are provided below:

Harry and the Haunted HouseHave the child name pictures of objects and characters on each page. To teach higher-level vocabulary words, have him/her name parts of objects (e.g., the "roof," "chimney," and "windows" instead of just saying "house").

Have the child point to pictures of objects and characters that you name to increase vocabulary comprehension.

To increase sentence length and improve describing and question-answer skills...

Have the child describe what is happening in each scene of a story. Encourage noun+is+verb(ing) combinations (e.g., "Harry is hitting the baseball") and the use of specific nouns and verbs vs. vague phrases like "He hit it."

Describe characters and objects in each scene using a variety of adjectives/attributes. Play a modified game of I-Spy. Have the child provide clues to describe an object or character, then try to find it within the scene.

Ask a variety of who, what, where, and when questions about objects, characters, actions, and the actual text after each page has been read aloud. Ask these same questions again once the entire story has been read (e.g., "What happened after Harry hit the baseball?" "Who found the baseball at the end of the story?" "Where was the ball?")

Use the girl and boy characters in each scene to practice a variety of pronouns (e.g., he/she, him/her, they) if you hear the child mixing them up (e.g., "Her is walking" or saying "he" for both boys and girls). The Berenstain Bears story lends itself well to practicing boy and girl pronouns.

Use the characters' animated actions in each scene to practice verb tenses. Ask "what WILL he do?" to encourage use of the future tense (e.g., "He will walk") or ask "What DID he do?" to encourage use of the past tense (e.g., "He walked"). Have the child retell pages of the story in their own words to practice third person singular (e.g., "First the turtle wakes up, then he goes outside, then he sits down").

Practice expressing the specific locations of objects and characters in each scene using prepositions (e.g., in, on, under, next to, above/below, between).

After reading the story through once, turn off the sound and go back to the beginning. Have the child retell the story page-by-page in his/her own words. Listen for any grammar errors that come up (e.g., "Them goed in the house"), and then model the sentence correctly (e.g., "That's right, they went into the house.")

Ask the child "why?", "how?", and prediction/inferencing questions about scenes or actions on each page. For example, "How are the bears feeling?" "How could you tell that they're mad?" "What do you think their mom and dad will say/do next?" "What would you do if your brother wouldn't let you play with his toy?"

Pick two objects or characters (e.g., two different animals) within a scene to compare and contrast. Ask the child to tell you how they are alike and how they are different.

Describe objects or characters within a scene for the child to locate and touch (e.g., "Find something that is round, has hands, and tells us the time," "Find a red animal that flies and builds a nest.")

Provide multi-step directions containing a variety of concepts for the child to follow (e.g., "If I touch the cat, you touch the flower," "Before you touch the tree, touch the dog," "Touch the teacher, touch the board, and touch Buster").

Provide directions involving specific location concepts (e.g., "Touch the child who is third in line," "Touch the animal that is in the pond and beneath the bird”). 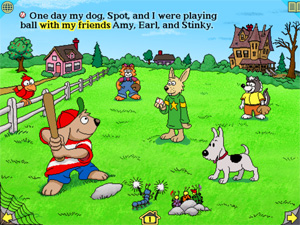 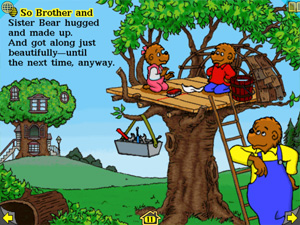 Note: This case study was submitted to Wanderful so that the story could be shared with other teachers who may be able to learn from or adapt these techniques.

If you have an anecdote or story about using any of the Wanderful Apps you would like to share with others, please send it to us. We promise to contact you to approve the final form of any story we plan to post to the Wanderful website. Send your story to: support@wanderfulstorybooks.com  with "case study" in the subject line. We look forward to hearing from you.

Return to the Teachers page